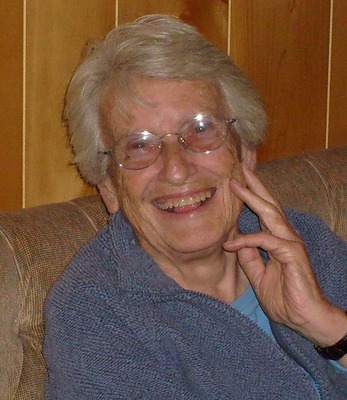 Mrs Frances Edith Sampson, known to all as Edie, was a leading light of the Club for almost three decades. She served as Assistant Bosun and Bosun for over 25 years, as Commodore for two terms and as a Trustee of the Club from 1993 until 2011. The Club was especially proud when, in 2008, Edie received an RYA Community Award. Edie was elected an Honorary Member of Seafarers in 2009. Sadly, after a fall at home followed by a brief spell in hospital, Edie passed away on Monday 12th September 2011.

Edie embodied all those qualities that had made Seafarers a thriving and successful sailing club. She was an outstanding example of dedication and enthusiasm. To most members during the nineties and the noughties, Edie was the personification of Seafarers. Until 2011 the Club's annual programme included a "Vice Commodore's Challenge". Since 2012 this has been replaced by an event for which a new prize, "The Edie Sampson Trophy", is awarded.

On Saturday 14th September you should bring a picnic lunch as the Club's Bart's Bash will take place in the morning (Duty Crew 'D'), the bar will open at lunchtime and the Edie Sampson Trophy Race will take place in the afternoon (Duty Crew 'K'). The Edie Sampson Trophy Race will be a Pursuit race with a nominal duration of 90 minutes and a start time of 2:30pm. High water is at 12:41pm.

After the race, the Vice Commodore will award the trophy to the winner. The bar will be open again and free snacks/nibbles will be available.

Please log-in to see details of crew available (0) / boats needing crew (0) or to add your own details.

Previous Add to calendar Next