A Member is a Family

At the inaugural meeting in Hammond Hall in January 1961, it was agreed that the Club was to be run on the lowest subscription possible so as to attract the widest family membership. The "family-friendly" ethos was enshrined in the rules and the fee structure from early on. In 1962 the rules read "A full member shall be recognised as husband and wife" and in 1964 the Committee agreed that the membership subscription would include member, wife and children up to the age of 16. It is interesting to ponder whether the implication that the member was the male and the partner was a wife would be "PC" in the 21st century! Our Rules now, in 2020, read as follows:

"A FULL MEMBER - which expression shall include one person and his/her partner and any of his/her children that are younger than twenty-five years of age and undergoing a full-time, unpaid, course of training".

Adherence to the concept that a member is a family has helped the Club to provide "affordable" access to sailing by offering membership fees for families that are usually the lowest in the area.

At the Club's inaugural meeting, it was agreed that numbers would be limited to 50 members working with 4 boats. Throughout the 1960s, membership seems to have been a worry. In 1965, the Committee decided to reduce the fees in order to attract more members. By February 1965 "there had been an increase in membership" but at the AGM at the end of 1967 there was reference to "the shortage of members".

From 1974 onwards, after the Club aquired the compound at the Salterns, membership was effectively limited by the number of boat spaces available. By the end of 1974 there were 91 members 11 of whom were cadets. At the beginning of 1977, the Committee set a membership limit of "110 boat owners, 25% non-boat owners plus 12 new cadet members every year". Applicants would go on a "Waiting List" when limit was reached. Throughout the 1980s and 1990s, lack of membership applications was never a problem. At the end of 1984 it was reported that "there have been few periods in the year when there has not been a waiting list". In 1987 "Club membership had been at the highest recorded level at a time when some dinghy clubs in the area were in the doldrums". With problems of growing membership and lack of boat spaces, the Committee closed the membership list for 1991. 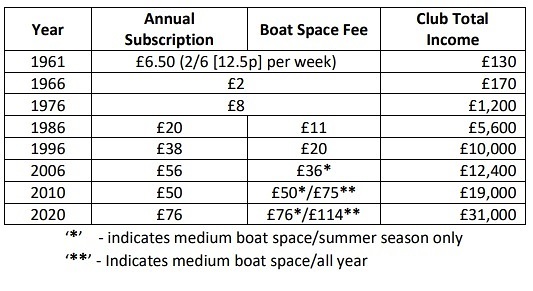 A Membership Review was carried out in 2008. The subsequent changes, approved at the 2008 AGM, were primarily a simplification of membership types and the introduction of a formula defining the relationship between the various fees. Although applied every year thereafter, the formula introduced in 2008 did not appear as a byelaw until 2015. In 2020 the formula is as follows:

Second Boat and Size of Boat. Membership had always, effectively, been limited by the number of boat spaces available. During 1988 there was a complete re-write of the Club's Rules and Byelaws. These were approved at the AGM that November. In the debate, the contentious issue of the number of boats per family was raised. Some members considered a proposal for 2 boats per family an abuse of Club potential income. Other members cited the case of married couples that were active sailing members, sailing their own individual boats and also members dual interest in cruising and racing, requiring 2 boats. A motion, by Edie Sampson, that each membership is entitled to 1 boat space but a second boat can be approved by the Committee was passed by 26 votes to 12 votes.

Overwinter. Prior to the winter of 2009/2010, boats had to be removed from the compound between December and March. Members who had not removed their boats by mid December might receive a warning that their precious dinghy could become fuel for the New Year's Eve bonfire if it was not promptly removed. At the 2008 AGM, a motion was tabled to abolish the Rule that boats should be removed from the compound each year. It was considered unlikely that everyone would want to leave their boats in the compound but it would be a very useful facility for those members who found it difficult to find somewhere to store their boat over winter. Members who had to pay significant fees for over-winter storage would prefer to pay this money to the Club. Those who left their boat in the compound over winter would be able to get afloat during spells of fine weather. Several members opposed the motion. A major concern was that the boat parks of a number of clubs in the area were littered with hulks and, it was felt, Seafarers did not suffer this problem because the compound was emptied at the end of each season. Although a majority of those present supported the motion, it was less than the two-thirds required to change the Rules. The issue remained a topic of discussion throughout the following season. At the 2009 AGM, a very similar motion was tabled and very similar arguments presented. This time the motion was carried. This has helped raise Club income and allowed winter sailing activities to take place such as the Winter SLOSHH Series. 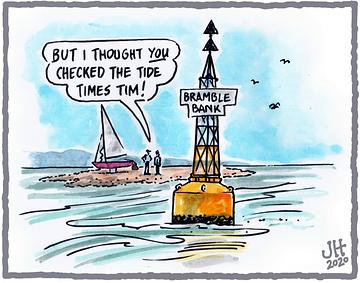 By the beginning of the 1970s, members who were aged 65 or over paid a reduced annual subscription. By the 1980s, the Club Rules included "Senior Membership". This was for those of state retirement age. Membership subscriptions for Senior Members were half those of Full or Family Members. At the 1999 AGM, this discount was adjusted. Senior Citizens were required to pay full fees until they had been Club members in any category for three years. Thereafter their subscription would be half of the full rate. It should be noted that Senior Members had the same duties and rights as Full or Family members.

As mentioned above, there was a membership review in 2008. The changes approved at the 2008 AGM included reducing the number of fee-paying membership classes to two. Senior membership, with its discounted subscription, ceased to exist.

In 2012, the Commodore, Peter Cox, began advocating a new form of Senior Membership after encountering mature members who rarely, if ever, sailed and had left the Club because they found duties challenging and onerous. If removing the duty requirement avoided the loss of such members, the Club would benefit by retaining income and wise counsel. An important issue was to define a non-sailing, non-duty membership that was not the anathema to Seafarers known as "social membership". At the 2012 AGM, a new Senior Membership category was approved. This was available to members aged 70 or over who had been active Club members for some time but no longer sailed regularly. They would not be required to do duties but nor would they be entitled to a boat space. At the 2015 AGM, the annual subscription for Senior Members was set at 50% of the standard subscription.

During early 2015, the Seafarers' membership system was migrated from paper to online with the introduction of WebCollect. This is an online membership and events management program for clubs, societies and associations. Seafarers uses WebCollect for storage of membership data, membership renewals, event registration and booking, merchandise ordering and group emailing to members.

In addition to automating several of the Membership Secretary's tasks, WebCollect allows members to make bookings for social events, training courses and Club boats from the comfort of their own homes. Although it can issue requests for payment and emails acknowledging that payment has been made, WebCollect does not make or accept payments.

Although, perhaps, not the most user-friendly of programs, members eventually learn how to use WebCollect and it provides the facilities we need at a price we are content to pay.