The opening paragraphs of Part 1 of this history ("The Early Years") describe how John Harmer came to found the Club. Who was John Harmer? John was born in Lee-on-the-Solent in March 1924. For a period, John's father, Frederick Harmer, served as Pier master. John's maternal grandfather, William Rusbridge, was Sailing Secretary of Lee-on-the-Solent Sailing Club. John would occasionally watch the club races from the end of the pier. John attended Gosport Secondary School. In early 1939, aged 15, he joined the Royal Navy as an Artificer Apprentice specialising in aircraft maintenance. During the war years he served on HMS Victorious. He later served on HMS Eagle. John met Mavis Clarke when she was shift working at HMS Daedalus as a teleprinter operator with John's sister. John and Mavis were married in Gosport, between shifts, on Christmas Eve 1948. After 15 years service, John left the Royal Navy in 1954 and entered civilian life as a draughtsman in the aircraft industry. An opportunity led him to work in Canada. He returned to Lee-on-the-Solent in 1959 for family health reasons and was employed by Folland Aircraft in Hamble. It was during this period that John founded Seafarers Sailing Club. In the speech below which he prepared for the Golden Jubilee, John explained why he had set up the Club. Unfortunately, poor health prevented John from attending the anniversary celebrations in January 2011.

As a young boy, one of my hobbies was angling. I built my first seacraft using builders' planks and road tar. This bothered my father who made me promise to respect three rules:

In the summer of 1960, on a calm summer afternoon, two youths drowned off Lee-on-the-Solent during a fishing trip. This bothered me; I had been on many successful fishing expeditions in much harsher conditions. I could find no facility to teach people the dangers of small craft handling in the way that my father had taught me. With my experience of small boat operations in the Royal Navy and as a Canadian Red Cross water safety instructor, I felt confident that I could form a club to promote awareness of the hazards of the seas. I would like to dedicate the formation of Seafarers Sailing Club to the memory of my father. I would also like to pay tribute to all members, past and present, for their devotion to the ethos of this wonderful organisation.

John and Mavis Harmer circa 2000 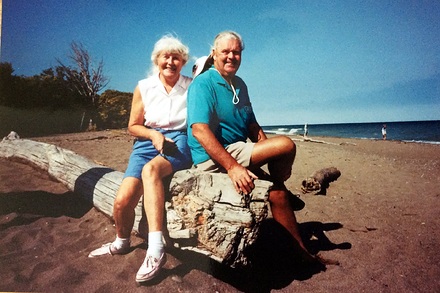 John retired as Commodore of Seafarers Sailing Club in April 1964 when he and his family emigrated to Canada. Sadly, John passed away in April 2014, one month after his ninetieth birthday. He had suffered a stroke 4 months earlier which had left him with many complications including heart trouble. About a year later, Mavis moved from Windsor, Ontario, where she and John had lived, 2,000 miles northwest to live with her daughter, Elaine, in Edmonton, Alberta. John and Mavis' son, David, and his wife Kathy, live 300 miles south of Edmonton in Lethbridge, Alberta.

Despite being 3,000 miles away, John and Mavis maintained contact with Seafarers. Over the past decade alone, they have very generously donated almost £6,000 to the Club and its charities. Since John's passing, Mavis has continued to make frequent and generous donations. Amongst many other projects, their donations have helped to provide binoculars, the 'Honorary Members' board, the patio awning, and five Club dinghies.

2020 has been blighted by the Coronavirus pandemic. One brighter note came in April when Mavis celebrated her ninetieth birthday. On behalf of all Club members, the Commodore sent Mavis a card, a gift and a DVD containing a video message. In the video, singing "Happy Birthday", the 'choir' hit all the right notes but, perhaps, not in the right order! A very sincere and touching response was received from Mavis and Elaine. The video is available from the Video Library.

At the time the Club was founded, John and Mavis, with their children David and Elaine, lived in 33 Northways, Stubbington. When Tim Wadham began his four years service as Commodore in 2005, he lived with wife Joy at 32 Northways. A few months after the formation of the Club in 1961, John and Mavis moved to Short Road, Hill Head. This is less than 200m from the home of our Commodore for the past 5 years, Phil Warwick, and his wife Kathy.